Off the Beaten Track: The Mouth of Hell

"In the case of expulsions of rocks, protect yourself under the car." This was the first sentence to catch my eye on the pamphlet the guard gave us upon entering the Parque Nacional Volcan Masaya. If this weren’t ominous enough, then the sign at the top of the volcano was. "Park your car facing exit, in case of emergency." Of course, my first question was, if such an emergency were to arise, which action should I perform first?

Nicaragua has nine active volcanoes running up the centre of the country like a volatile spine. The Volcan Masaya is the most accessible and, by extension, the most popular. It is also a rare form of basalt volcano, which attracts scientists from around the world in addition to the steady flow of tourists. It erupted for the first time in 4550 BC, and to date, it is one of the largest eruptions on historical record.

On the day we arrived in a rattling, aging mini-bus, the volcano was smoking profusely – emitting noxious sulfuric fumes that stung our eyes and nose. Despite the haze, however, we were suitably stunned as we approached the gaping yawn of the Santiago crater. The drop to the crater floor is vertiginous. The stark grey windswept landscape gave us the impression a mischievous god shoveled out the centre of mountain with an ice cream scoop. My stomach convulsed. My feet hurt. The wind whipping in, out, and over the toothless maw didn’t help. I felt as though at any minute I could be plucked from the safety of my perch and tossed insignificantly into the mountain’s belly. It was awesome.

When the Spanish arrived on scene in 1524, the vent was a bubbling lake of molten lava. The crater remained that way until 1979, when the lava retreated. The cross that stands watch over the site to this day, was first erected by those same conquistadors, who gave the mountain its nickname, boca de infierno – the mouth of hell. The cross was meant to stop the devil from surfacing. Its effectiveness, however, is still in question, given the great eruption of 1772. In fact, the stairway to the cross is currently inaccessible due to a minor eruption six years ago. Workmen were toiling away at it in the incandescent sun on the day of our visit. The indigenous tribes who predated the Spanish were more efficient. They simply tossed appeasing sacrifices over the edge every once in a while.  We were hoping to catch a glimpse of the famed chocoyos del crater – the florescent green parrots that make their nests in the crags and caves of the cliffsides, mystifying scientists – but, alas, we were not so lucky. The volcano, which is one of the world’s largest natural producers of dioxides, also expels bioxides which when combined with saliva form sulfuric acid. Other than the arcane chocoyos no other life exists for miles around the vent. Needless to say, visitors are encouraged to limit their stays. 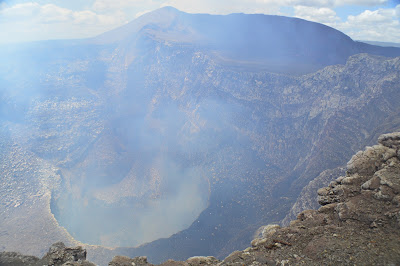 Trails, maintained by park staff, circle the bleak and rocky moonscape, offering the intrepid traveller the opportunity to explore the fields of volcanic ash and stone, which look the forlorn and twisted sculptures of a modern art museum. As we discovered, however, these trails can come to abrupt ends as they near the crater’s edge and become unstable. Simple wooden signs appear without warning, forcing the hiker to retire, or to continue at his own risk. 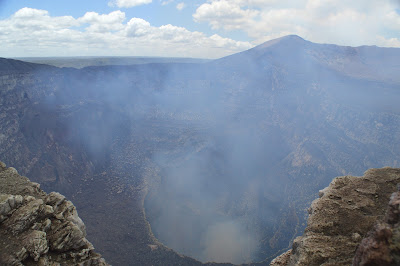 The Sandero de los Coyotes, if you can get past the name, is the longest and most interesting of the trails, taking several hours to complete. But even if you have only a short while, the volcano is worth a detour. You will never see anything else like it on earth.

Where in the world is Nandaime, Nicaragua?